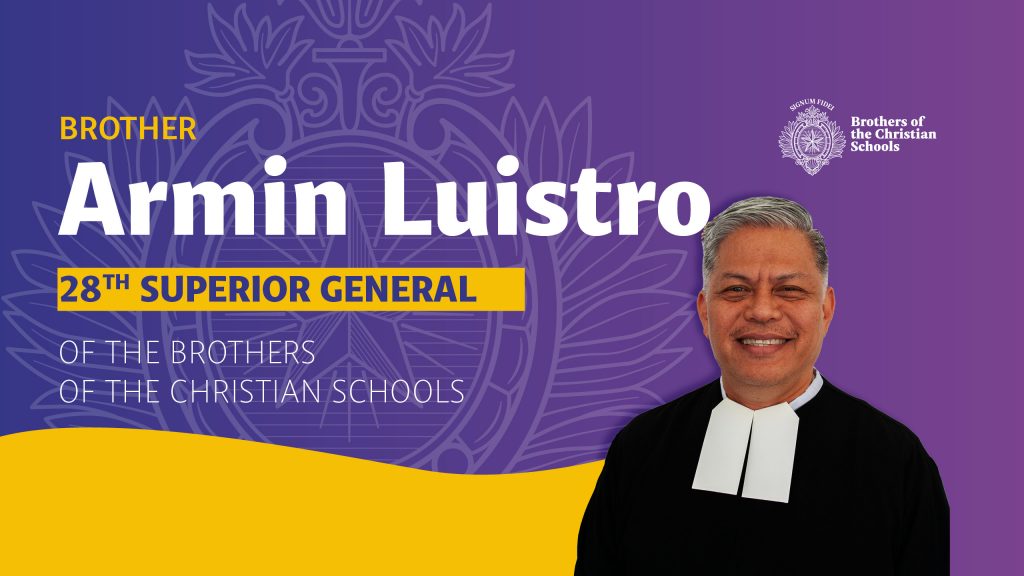 On 18 May 2022, during the 46th General Chapter of the Brothers of the Christian Schools, the Assembly of 70 Chapter Brothers, meeting in the Aula Magna of the Generalate in Rome, elected Brother Armin Luistro 28th  Superior General of the Institute.

The election comes eight years (seven years according to the Institute’s Rule, but one more because of the pandemic) after the previous government was appointed in 2014, also in Rome.

The Superior General was voted, by the 70 Chapter Brothers, in absolute silence. As the name of the chosen one was pronounced, all the Brothers present in the Aula Magna, and those who did not have the right to vote had been invited to leave the Hall, were able to re-enter to congratulate the newly elected. To accompany the solemn moment, the bells of the Sanctuary of the Generalate joyfully rang for a few minutes.

Brother Armin Altamirano Luistro, FSC, was born on 24 December 1961. Luistro joined the La Salle Scholasticate (the academic training centre of the Brothers of the Christian Schools) in Manila in April 1979, while studying at De La Salle University (DLSU).

Brother Armin started his teaching career at De La Salle Lipa in Batangas, where he worked as a religion teacher, class counsellor and campus minister from 1983 to 1986.

Brother Armin brings with him more than 34 years of experience in both the private and public sectors. He was Secretary of the Department of Education from June 2010 to 2016. Previously, he led De La Salle University, where he was President from April 2004 to June 2010.

In previous years, he also served as President of the De La Salle University System and several other La Salle schools. From 2017 to 2019, he returned to serve as President of De La Salle Philippines, the network of La Salle schools in the country. He is currently a board member of the Philippine Business for Social Progress (PBSP), the largest business-led non-governmental organisation in the country. In May 2019, he was appointed Brother Visitor of the Lasallian District of East Asia.

Brother Armin has also held various positions in other governmental and intergovernmental organisations, such as the Advisory Council of the National Youth Commission (NYC), the UNESCO National Commission of the Philippines and the South East Asian Ministers of Education Organisation (SEAMEO).

He has also been an active member of the Philippine Council for NGO Certification (PCNC), the Knowledge Channel Foundation, the Philippine Business for Education (PBEd) and the Sidhay Foundation for Street Children.